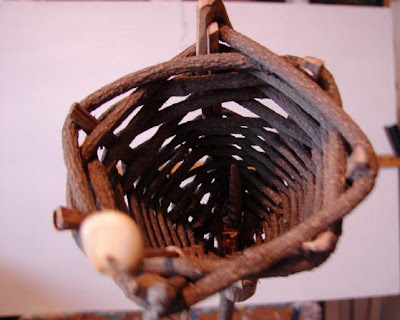 Twenty-five years ago I went to a World Food Day celebration at Kaloleni in the palm-covered hills to the north of Mombasa. The meeting was presided over by the Kaloleni Divisonal Officer and attended mainly by government agricultural staff and the members of women's groups from the surrounding area. The centrepiece was a display of local foods which everyone was invited to inspect and then taste - after the obligatory singing, speechifying, certificate-giving, and distribution of bottles of sugary-sweet soda. Apart from purple maize cobs and meal of a kind that might have excited Barbara McClintock, the most notable of the local delicacies on offer were roasted rodents. At a glance these looked like grilled fish, but I was assured that they were indeed kadzora (pl. udzora) as this "wild rat" was called in Giriama and other northern Mijikenda dialects. The D.O., who was a Luhya from western Kenya, began his speech by referring to the wide variety of foods on display, "plus kadzora", implying that this particular kind of bushmeat didn't quite qualify. Diets divide cultures and subcultures, and the consumption of rodents and other unusual foods is a marker of social difference that is a staple (no pun intended) of everyday humour (kadzora has now made it onto online chat forums) and of 'human interest' stories in the media (e.g. Lukumbo 1995; Ringa 2004). 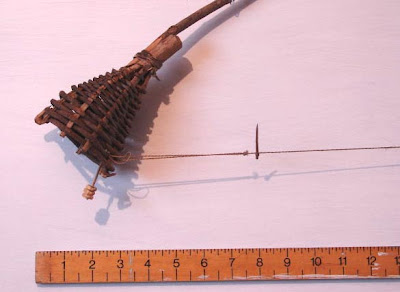 Coincidentally, walking back from the meeting in Kaloleni to Chilulu, in Jibana location, we passed some children digging for kadzora. I was told that they could also be caught at night in traps made with a coconut shell. On another day, walking to nearby Tsakarolovu (where anthropologist David Parkin worked), I again saw signs of digging for kadzora, and was told that the burrows could be up to a metre in length. One of my companions asserted that kadzora was in fact a Giriama name for an animal that Jibana and Chonyi speakers called pingi (I now doubt this, for reasons discussed below). I had no idea at the time what kind of "wild rat" this might be. The Rev. W. E. Taylor defined Giriama kadzora as a "mole" (1891: 63); Florence Deed as both a "mole" (presumably after Taylor) and a "little black field rat" (1964: 25).The only zoological clue I have since found comes from an old collection at Wema in the Tana Delta where kadzora was given as a Lower Pokomo name for the zebra mouse Lemniscomys griselda (Allen and Lawrence 1936: 106). Lower Pokomo and Northern Mijikenda are neighbouring and closely related groups of dialects, and it may well be that Giriama kadzora also refers to zebra mice and/or other edible murids (cf. Kingdon 1997: 213).

A most efficacious rat trap is made by splitting down the end of a thick sapling into eight sectors. These are opened out and thin pliant twigs are woven in and out in the manner of a hurdle till a funnel some six or eight inches long is formed. A string made of sisal fibre is attached to the other end of the sapling, which is bent over like a bow. A noose [...] is made at the other end of the string and held by a peg resting against a notch in a small stick or thorn on which is fixed a grain of maize. The slack of the noose is so placed that the rat must put its head and neck right through in order to get at the grain. The slightest agitation of the grain releases the peg, the sapling straightens and the noose tightens. (Champion 1967: 46) 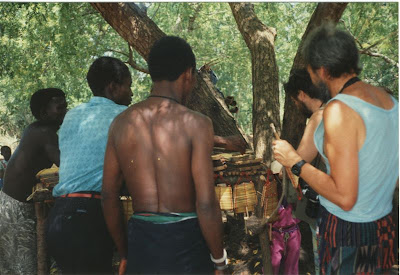 I didn't get my hands on one of these until November 1991, during a family visit to Gede (Gedi) Ruins when we wandered into the artificial 'Giriama village' where groups of tourists pay for dance performances (we watched one that was already paid for) and are sold various knick-knacks and handicrafts. Among the tourist tat were some functional items, including small mammal traps (Giriama muhoto, pl. mihoto). Two types of trap were for sale: the funnel trap described by Champion (muhoto wa mbugu, where mbugu is the creeper it is woven with), and one in which the funnel was replaced by the empty half-shell of a baobab fruit (muhoto wa uyu), with its lovely velvety exterior. Taylor's dictionary also refers to this type (1891: 106), while Deed alludes to similar traps in which the body is supplied by a half-coconut (1964: 60) - the kind I was told about on the way to Chilulu. The funnel trap is depicted in a popular book about the Mijikenda (Mwangudza 1983: 18, Fig. 5); the baobab-shell type in studies of the utilisation of the Arabuko-Sokoke Forest, near to Gede (e.g. Mogaka 1991: 58). Mogaka also illustrates what appears to be a larger version of the funnel type, called kizimba and baited with small mammals to catch medium-sized mammals (1991: 55, 59; 1992: 23, 26). A "Tumbatu Monkey Trap", described by Ingrams from the north of Unguja island, Zanzibar, is similar in design and construction: it comprises a baited peg and noose inside a wicker funnel; when sprung the noose tightens on the monkey's hand (1931: 294-295). I've also discussed these parallels in my paper on 'Island subsistence' (2007: 92). According to studies in the Arabuko-Sokoke, the smaller traps are used to catch elephant shrews and small mongoose as well as rats and mice (Mogaka 1992: 23; Fitzgibbon et al. 1995; 2000). 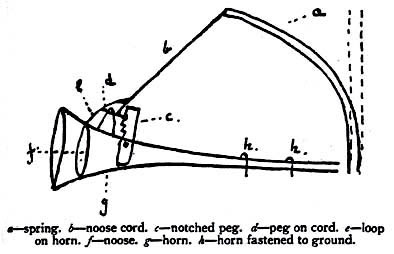 I elicited the Giriama names of the traps from one of the sellers, who hailed from a village just north of Malindi. I also wrote down the names of different components: the sisal string (lugwe lwa konje), bait (chambo), and the peg used to set the trap (katoyo ka muhoto). He said that they were used to catch both kadzora and the tastier tali, a field-mouse "much esteemed by the Giryamas as a great delicacy" according to Taylor (1891: 64). The tali (thali in current orthography) has been identified at Gede as the Fringe-tailed gerbil, Tatera robusta (syn. Gerbilliscus robustus) (Costich 1977: 12). My Giriama informant contrasted these with the light-colored, long-snouted p'inji, which dies when it crosses a path and is inedible. This creature is a common ingredient in the making of Giriama arrow poison, and although I didn't know it at the time, is a generic name for shrews, inlcuding the white-toothed shrews, Crocidura spp. (cf. Walsh 1992). Giriama p'inji is cognate with Jibana / Chonyi pingi (see above), and I would be surprised if they didn't have the same basic range of reference. Shrews are insectivores, not rodents, but this distinction isn't made by Mijikenda speakers, nor, to my knowledge, is it recognised in other East African ethnotaxonomies. 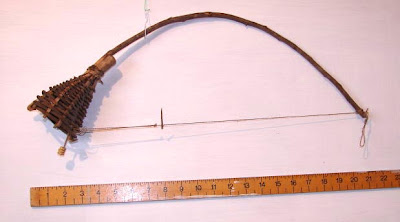 There are no doubt other edible rodents that he did not mention. I came across one of the largest in our garden in Nyali, Mombasa, in May the following year. This is was a dead giant pouched rat - I assumed an immature or small female Cricetomys gambianus - 67 cm from the end of its nose to the tip of its tail, 35 cm of which was the length of its tail. It had puncture marks under one of its eyes and on one of its back legs, and I wondered whether it had been killed by a snake. I stuck it in the fork of a tree. Karisa, our Giriama-speaking gardener, identified it immediately as k'uhe (pl. k'uhe), the largest kind of rat that he knew. He added that two kinds are recognised: the k'uhe which comes out with the moon, and collects a lot of food, and the k'uhe of dark nights - there being nothing to distinguish them other than this difference in their behaviour. Yes, he said, k'uhe are eaten, and like other rodents roasted in their skins once the fur has been scraped off. A single rat can feed four people. Now there's something to chew on for another World Food Day.

Acknowledgements
Thanks to James Walsh for digging out the photo from our trip to Gede Ruins as well as the funnel trap he purchased there. Not long after they were written Liz Wiley kindly sent me copies of the KIFCON reports about the utilisation of the Arabuko-Sokoke. I am also grateful to John Fanshawe for sharing later papers about the research there.

Allen, Glover M. and Barbara Lawrence 1936. Scientific results of an expedition to rain forest regions in eastern Africa. III: Mammals. Bulletin of the Museum of Comparative Zoology at Harvard College 79 (3): 31-126. 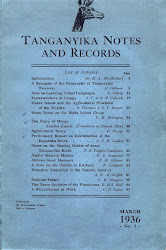 THE ZANZIBAR LEOPARD is a very occasional blog by Helle Goldman and Martin Walsh in which we post news, views and information about the Zanzibar Leopard (Panthera pardus adersi) and sometimes other wildlife in the Zanzibar archipelago.

Walsh, Martin 2020. Sewn boats of the Swahili coast: the mtepe and the dau reconsidered. Kenya Past and Present 47 (forthcoming).